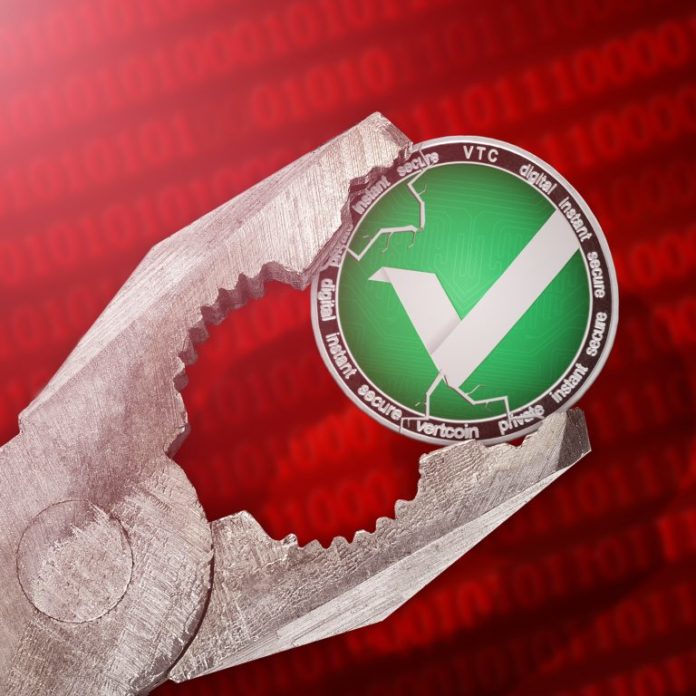 Vertcoin (VTC) is currently struggling with a series of 51 percent attacks and a number of blockchain reorganizations. According to recently published data, the vertcoin chain has experienced over 22 reorgs and has lost more than $100,000 due to the attacks, with the last reorg clocking in at over 300 blocks deep.

VTC was launched in January 2014 with a traditional proof-of-work system, but it has since moved to an “ASIC-resistant” algorithm known as “Lyra2RE.” Back in 2015, the developers explained that they believed mining should be processed by consumer-grade hardware to keep things decentralized. But now the Vertcoin network is under siege, following a number of 51 percent attacks on the protocol.

According to a recent analysis written by Mark Nesbitt, a security engineer at Coinbase, the Vertcoin chain has suffered 22 deep reorgs, with 15 of them including double-spends. Additionally, one of the last reorgs was 307 blocks deep, causing significant network issues.

The first incident began in October, when the chain experienced eight reorgs in total, with three of them including 71,243 VTC in double-spends. Double-spending is a flaw within a blockchain network scheme in which the same digital coins can be spent more than once.

A blockchain reorganization occurs when a miner gains more hashrate than the rest of the pools and chooses to mine a previous block in order to create a new block history. A reorg can be secluded to a local client, but if the whole system is dependent on a single client, it can affect the entire network. According to Nesbitt, the 300-block reorg cost the Vertcoin system over $100,000 worth of VTC.

‘ASIC-Resistant’ Miners Do Not Facilitate Decentralization

One Vertcoin developer named “Gertjaap” argued on Reddit that the 51 percent attacks were not happening because of ASICs. Rather, the developer claimed that the issue stemmed from cloud-mining services such as Nicehash.

“There’s too much hashrate for rent at too low a price, resulting in zero capex and low opex to do attacks,” Gertjaap detailed. However, a moderator from the subreddit quickly fired back, claiming that while Nicehash may be “facilitating the problem to a large extent,” concerns about “too much hashrate” were still due to ASICs.

In his research paper, Nesbitt noted that VTC’s problems are similar to recent attacks on BTG, XVG and MONA. He stated that there are actors who have the resources to execute such attacks on chains with different systems. “There are a large number of cryptocurrencies, including many based on Bitcoin, that implement their own proof-of-work-based blockchains,” Nesbitt said.

He continued by stating:

Observers of the industry have claimed that these assets have the same properties as bitcoin. This claim has now been undeniably, empirically
proven to be false.

In his analysis of the Vertcoin network, Nesbitt goes on to explain that cryptocurrency exchanges are an “ideal target” for 51 percent attacks. Attackers can always make “a soon-to-be-reversed deposit and trade for another asset,” he said. This was certainly true with the recent bitcoin gold (BTG) 51 percent attack, after which the Seattle-based Bittrex exchange delisted BTG due to the losses. “Exchanges that support these assets will continue to suffer losses, with the ultimate result that exchanges will be forced to delist these assets,” Nesbitt said.

Nesbitt concluded his paper by saying that it is hard to justify the theoretical value of such coins when they can be easily frozen by large reorg attacks and suffer losses from double-spends. He said that he hopes individuals and organizations patronize exchanges that don’t place customer funds at risk, but rather make security “their highest priority.”

What do you think about the 51 percent attacks on Vertcoin and the deep reorgs suffered by the network? Let us know in the comments section below.

As It Ramps Up Enforcement, the SEC Has Been Looking Abroad for Assistance

2018 has been a hallmark year for the U.S. Securities and Exchange Commission (SEC)’s enforcement against cryptocurrency companies, and, according to...