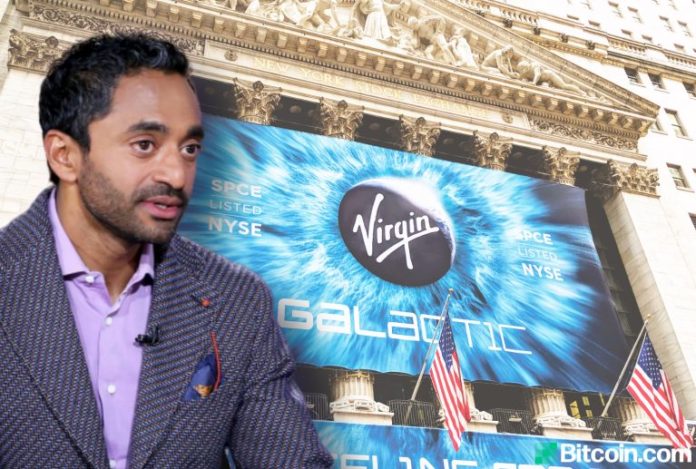 Virgin Galactic Chairman Chamath Palihapitiya has shared his bitcoin investment strategy, predicting that bitcoin’s price could reach a million dollars. He further suggested that everybody should have 1% of their assets in bitcoin since it is “a fantastic hedge.”

Chamath Palihapitiya, the chairman of Virgin Galactic and founder of investment firm Social Capital, recently discussed bitcoin and how to invest during the current financial crisis. In a podcast interview published last week with Morgan Creek Digital co-founder Anthony Pompliano, Palihapitiya was asked about his bitcoin investment strategy. Responding to questions about whether he had bought, sold or changed the bitcoin allocation in his portfolio in any way, the venture capitalist revealed:

“Most of my bitcoin now sits with a company and they use it for trading purposes. They use it to run a bunch of other strategies,” he added. “I did that mostly for safety and security and peace of mind. I didn’t want to deal with it. I wanted to own equity in the business. That equity can be hedged. That equity can be tax structured advantageously, and then it allows them to run a big business which generates cash, and I can get a cash and dividend stream.” He proceeded to confirm, “so I have not bought since I initially basically wrote that article for Bloomberg in 2013.”

Bitcoin is “still a speculative instrument and it’s too speculative for it to be reliable,” Palihapitiya opined. “So if you are going to make the case that it should replace fiat currency, well one thing you have to look at is the volatility of the U.S. dollar and you can’t replace it with something that’s nine sigmas more volatile. It doesn’t work.”

He then shared his prediction of how high he thinks the price of bitcoin could be over the next 10 years. “It is a 10-year trajectory,” he began. “I’ve always thought of bitcoin as a very binary investment, whether it goes from 80 to 8,000 to 6,000 to 3,000 to 13,000, it doesn’t matter.” Noting that bitcoin’s price will be “either zero or it’s millions,” Palihapitiya asserted:

What it will do is it will create a quasi gold standard. It’ll create an index, except instead of having to own gold where gold is owned by central banks, it is an instrument that has value that’s determined in between its participants, and it’s owned by everybody.

Palihapitiya has founded six companies and currently serves on the board of nine others, including Syapse Inc. and Remind101. He also previously worked at Facebook, Mayfield Fund, AOL, and Winmap.

Everyone Should Have Bitcoin

Palihapitiya also discussed bitcoin investing in an interview with CNBC last month. The Virgin Galactic chairman reiterated that his view on bitcoin remained unchanged since he authored the Bloomberg article on the subject in 2013, elaborating:

Everybody should probably have 1% of their assets in bitcoin specifically. I still believe that today and I think it [bitcoin] is just a fantastic hedge.

When asked about his thoughts on what Berkshire Hathaway CEO Warren Buffett said about bitcoin, Palihapitiya emphasized that the billionaire “is completely wrong and outdated on this point of view.” Buffett insists that he does not own any bitcoin and never will. Repeatedly saying that it has zero value, he once called the cryptocurrency “rat poison squared.”

Palihapitiya clarified to CNBC that investing in bitcoin should not be event-driven. “When you wake up and you see a coronavirus scare and the Dow down 2,000, you should not be going in and buying bitcoin — that is an idiotic strategy,” he opined. “I think a reasonable strategy is to say 1% of my net worth should be in something that is completely uncorrelated to the world and how the world works.” The Virgin Galactic chairman suggested going into bitcoin “quietly” and letting the investment accumulate. He concluded, “Then you just never look at it again and hope that that insurance under the mattress never has to come due,” adding:

But if it does, it will protect you because that thing will be hundreds of thousands or a million dollars a coin.

What do you think about Chamath Palihapitiya’s view on bitcoin? Let us know in the comments section below.

The post Virgin Galactic’s Chamath Palihapitiya: Bitcoin Could Go to $1 Million, Everybody Should Own Some appeared first on Bitcoin News.