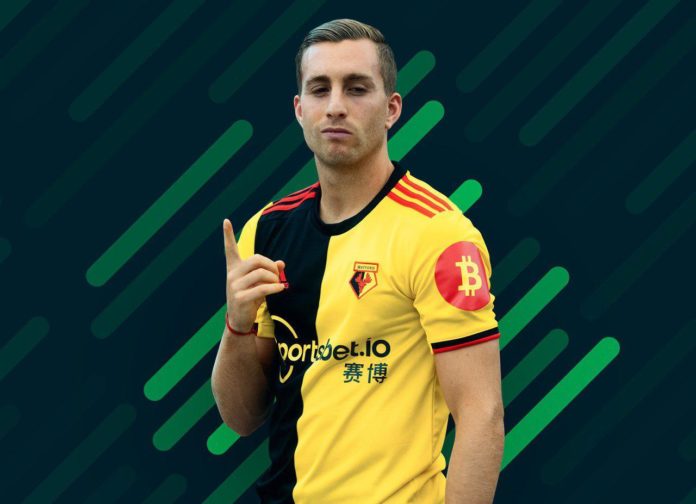 September 12th, 2019, Tallinn, Estonia – The Bitcoin logo (₿) will now appear on the shirt sleeve of Premier League football club Watford for the entirety of the 2019/2020 season, as part of an educational drive led by the innovative sports betting brand Sportsbet.io.

The logo is part of a wider campaign to improve awareness around Bitcoin and educate the public on the benefits of using cryptocurrencies. It is led by Watford FC’s primary shirt sponsor, Sportsbet.io, who announced a landmark deal with the Hornets team in June.

Justin Le Brocque, Head of Sportsbet.io Marketing underlined the thinking behind the decision, stating that;

“The crypto community has been massively supportive of us since our beginnings, so putting the Bitcoin logo on the sleeve felt like a fun way to give back while also showing our support for the community.”

The sponsorship will be crowd-funded, allowing potentially anyone who holds Bitcoin the exclusive opportunity to share in the perks granted to Watford FC sponsors. Contributors can bid for public LED space shown live during matches; ‘Money can’t buy, but Bitcoin can’ experiences, including the use of the Bitcoin box for 8 people, and exclusive Watford FC merchandise.

“Some of the biggest challenges we and others like us face are raising awareness, dispelling common myths around cryptos and educating the public on the advantages and opportunities presented by cryptocurrencies. Our partnership with Watford marks a major disruption in the world of traditional sports sponsorship, and by adding the Bitcoin logo we hope this world’s first partnership will create even more buzz around cryptocurrencies.”

To celebrate the Bitcoin sponsorship with all Bitcoin holders, Sportsbet.io are also giving away 2 mbtc Free Bet to all Sportsbet.io players, should Watford score against Arsenal this coming Sunday.

“Placing the Bitcoin logo on a Premier League shirt is something that challenges the accepted norm. We’re excited about the partnerships and the potential for new global conversations that it could help start for our club.”

Last month, Sportsbet.io announced a pioneering three-year partnership with Watford, marking the first time a company known for blockchain and cryptocurrency expertise had appeared on the front of a Premier League shirt.

The announcement was accompanied by the launch of Sportsbet.io’s ‘Know No Borders’ campaign, which highlights the brand’s commitment to putting players at the heart of the action, no matter their country, sport, team or currency. Sportsbet.io accepts a range of fiat and cryptocurrencies, including Bitcoin, to deliver the very best in fun, fast and fair gaming.

Sportsbet.io is the source of this content. Virtual currency is not legal tender, is not backed by the government, and accounts and value balances are not subject to consumer protections. This press release is for informational purposes only. The information does not constitute investment advice or an offer to invest.

Top 7 AI and Software Development Companies For Startups and SMEs