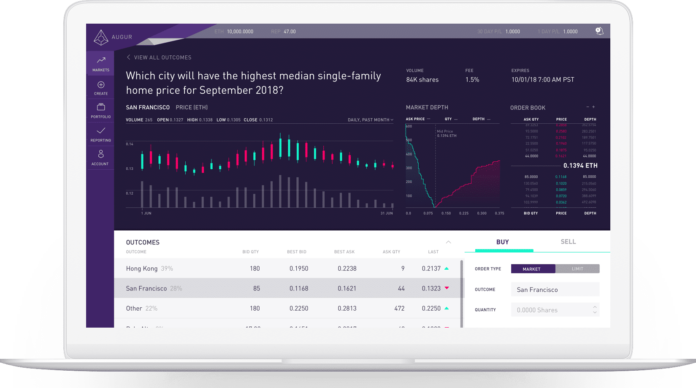 Augur is a decentralized prediction market platform that utilizes the Ethereum network. In a prediction market, you can bet on the outcome of future events to get monetary prizes. The less likely an event is to occur, the bigger the reward you can earn predicting its success.

Augur uses “The Wisdom of the Crowd” from predictors on the platform to create real-time predictive data that’s oftentimes more accurate than the leading experts.

By bringing blockchain technology to the prediction community, Augur provides you an option with fewer fees, greater accessibility, and better accuracy than other markets.

In this Augur guide, we’re going to talk about:

How Does Augur Work?

The two primary actions available to you on Augur are:

You need to spend a small amount of Ethereum to create an Augur market. Markets can be anything from “Will the price of Bitcoin hit $20,000 before the end of 2019?” to “Will aliens show up on Earth in 2018?”

Originally, when you created a market, you would set the taker and maker fees (the cost to buy and sell shares on the books) of that market.

Now, however, market creators set a creator fee, and there are longer maker/taker fees. The creator fee is a percentage of the rewards that winning traders receive. As a market creator, you receive this fee and it must be between zero and fifty percent of the winners’ rewards.

As a market creator, you want to keep the creator fee low enough to incentivize people to bid using your market. However, they need to be high enough to cover the initial Ethereum cost you spent to create the market.

Besides creating markets, you can buy and trade shares that represent the odds that the event in a market will happen. For example, you see a market, “Will Bitcoin Cash reach $6k by 2020?”

(For the sake of simplification, we’re going to stick with binary, yes/no, markets in this article. You can find a full explanation of the different markets here.)

Because Coinbase recently added Bitcoin Cash to their platform, this market interests you. You’re fairly confident that it’ll reach $6k before 2020, so you put in a bid to buy 50 shares at 0.6 ETH a share.

Shares are worth anywhere between  0 and 1 ETH. The higher the price you buy a share for, the more likely you believe that the event will happen.

There are two ways to make money as a trader. With fluctuating share prices, it’s possible to buy positions at a low cost and sell them higher as sentiment changes. Real world catalysts may cause an event to be more/less likely to happen over time.

You can also earn money if you predicted an event correctly and hold shares when the market closes. The amount of your payout equals:

The number of ticks is the number of possible price points between the minimum and maximum prices in a market. You can short markets as well.

You need to pay settlement fees from each of your winnings. The settlement fees include the creator fee set by the market creator and the reporting fee used in the Decentralized Oracle System. The larger your earnings, the higher the fees you’ll have to pay.

The REP token powers the Augur Decentralized Oracle System. You stake REP to report on the outcome of events for the different markets.

The reporting process is fairly complex. We’ll try to break it down step by step.

In the Open Reporting Phase, anyone can report an event outcome. The first person to do so receives the No-Show Bond which they must use as their stake. After either scenario, the market enters the Waiting for Next Fee Window to Begin state (c) and the market is given a tentative outcome. Following this state, REP holders can dispute the tentative outcome while putting up some amount of funds as their stake. Eventually, the outcome is finalized.

Now, the intricacies of this process are much more complicated. So, if you’re interested in learning more, you should check out the official documentation.

Started in October 2014 as one of the first platforms built on Ethereum, Augur is an OG in the crypto world. Jack Peterson and Joey Krug lead the 13-person team. The two have ample experience working with blockchain technology and previously created Sidecoin – a Bitcoin fork.

Vitalik Buterin, the creator of Ethereum, is an advisor to Augur.

The team released the first public version of Augur in June 2015. Shortly after, Coinbase selected Augur as one of the five most exciting Bitcoin projects of 2015. The beta version was released in March 2016.

After a multi-year long beta period, the Augur team finally released the official main net in July 2018. Two weeks later, the team destroyed their ‘kill switch’, a piece of code that gave them control over the network in the event of a critical bug. Doing so further decentralized the project as a central entity no longer has control. Some people hypothesize that the team did this partly to exonerate themselves in the case of illegal markets popping up on the network.

They have quite a lot in store for version two of the platform as well. Their roadmap includes DAI integration, a buyback and burn fee system, and ERC-777 support among other features. They have not announced a release date yet.

Augur’s biggest competitor is Gnosis. Both projects have teams with significant prediction market and blockchain experience and are using similar technology to create almost identical products. The major difference between projects is within their economic models. Augur collects fees based on trading volume while Gnosis fees are proportional to the outstanding shares.

Even with similar products, the market is large enough that both of these platforms could realistically coexist.

The first occurred in March 2016 as a result of the beta release.

The second was in October 2016 when investors received their REP tokens from the ICO. This caused the price to quickly increase before dumping as exchanges added support for the tokens. Although this seems like strange behavior, this is a common occurrence after ICOs. Many investors do this to get profits caused by the price increase that occurs between the time of ICO and when the company releases the tokens.

The third and largest price increase occurred at the end of 2017, beginning of 2018. It reached an all-time high just shy of $115 (~0.00810 BTC) before following the rest of the market downwards for the majority of 2018. During this downturn, the price jumped significantly two times – once in April/May and another time coinciding with the main net launch in July.

The platform hasn’t gotten the adoption that investors hoped it would, and the current price reflects that. You can get REP for about $8.77 (~0.00205 BTC) right now.

The release of the network’s second version may lead to some positive price movement as well as additional adoption.

Where to Buy REP

Additionally, you can use Kraken to purchase REP directly with EUR.

Take a look at CoinMarketCap for a complete list of exchanges where REP is available.

Where to Store REP

Augur has not built a specific wallet for the REP token, but you still have plenty of options. Jaxx and Exodus are two reputable online wallets that support multiple currencies, including REP. Because Augur is an ERC20 token, any wallet with ERC20 support will do.

The recommended way to store REP is with a hardware wallet. Using a hardware wallet protects your funds from malicious software and hackers. The Ledger Nano S and Trezor wallet support REP tokens and are both great, secure options.

Augur is one of the oldest projects out there and was one of the first to be built on top of Ethereum. The platform is a decentralized marketplace for prediction markets and event likelihood stock trading.

Augur uses “The Wisdom of the Crowd” to accumulate predictive data and report event outcomes. The team is experienced in working on predictive markets and has been iterating on their product for over two years now.

With a successful launch in the books, Augur should pave the way for other dapps on the Ethereum network. Only time will tell if it gains enough adoption to fill this role, though.

Editor’s Note: This article was updated by Steven Buchko on 12.01.18 to reflect the recent changes of the project.

The post What Is Augur (REP)? | A Guide to the Decentralized Prediction Market appeared first on CoinCentral.