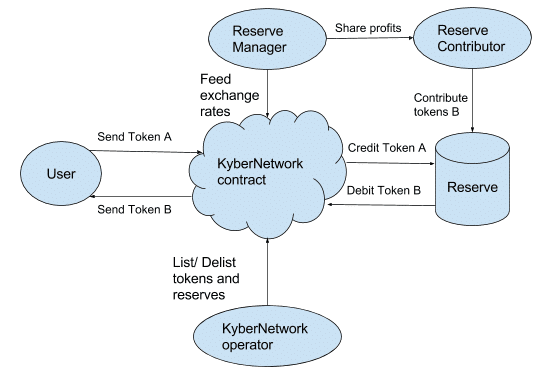 What Is Kyber Network?

Kyber Network is an Ethereum-based protocol that allows the “instant exchange and conversion of digital assets (e.g. crypto tokens) and cryptocurrencies (e.g. Ether, Bitcoin, ZCash) with high liquidity.” It’s similar to the 0x project but instead performs all its actions on the blockchain.

Centralized exchanges are constantly under fire for their security vulnerabilities and slow process times. In some instances, it could take days to withdraw your funds from an exchange. Popular decentralized exchanges have their flaws as well. They oftentimes don’t have enough liquidity to support active trading, and costs to change a trade can be high when the order book is kept on-chain.

Kyber Network provides a decentralized, on-chain exchange, but removes the order book. This gives the platform the ability to securely exchange your crypto instantaneously at minimal cost.

In this Kyber Network guide, we’ll be covering:

How Does Kyber Network Work?

Other than an exchange, Kyber Network is used as a medium to transfer tokens from person to person. This is great for p2p transfers as well as ICOs. The tokens that you send don’t have to match the specific token that the receiver wants to…receive. Kyber does the exchange during the transfer. Let’s look at a quick example:

Bob owes Sally 0.01 ETH for a hotel room they split on vacation. Unfortunately, Bob only has REP. Sally really wants ETH, not REP, so they use the Kyber protocol to settle the transaction.

Bob sees on the Kyber Network interface that the conversion rate for the transfer is 1 ETH = 16 REP.

He enters a request to Kyber to convert 0.01 ETH worth of REP and send it to Sally. The Kyber contract (what controls the token reserve warehouse) first checks that Bob included enough REP in the contract for the conversion.

After approval, the contract then sends the 0.01 ETH to Sally’s address. With the Kyber Network standard contract wallet, it will appear to Sally as if the funds came directly from Bob’s address.

Lastly, Bob’s REP, plus a small fee, is added to the reserve pool in which the ETH originated.

There are a few different roles in Kyber Network you should be aware of:

All of these roles interact with the Kyber Network smart contract differently.

By allowing external Reserve Entities, Kyber Network prevents centralization and opens the door to low-volume token listings. External reserves may be fine with taking on the risk of storing less popular tokens that the Kyber reserves don’t list.

To prevent bad actors in the reserve pool, Kyber Network has few safeguards. The network will flag any exchange rate for special approval that’s greatly outside the norm. To protect funds in a public reserve, Kyber makes all exchanges using them available through a transparent fund management model.

Reserve Managers earn profit through the spreads they set for their reserves. They also get the benefit of increased volume by tapping into the overall Kyber Network as well as a Kyber-provided dashboard to manage their reserve.

KNC is an ERC20 token that Reserve Managers need to purchase to operate a reserve on the network. Each time an exchange occurs, the network charges a small KNC fee to the reserve.

The fees are partly used for operational costs and to reward third-parties who bring trade volume to the network. After the proportional amount of KNC is used on these two things, the remaining tokens are burned (taken out of circulation). The company minted a total of 226,000,000 KNC during the ICO and distributed a little over 60 percent to public participants. There’s currently around 134,000,000 KNC in circulation. This number will fluctuate over the next two years as the founders and advisors’ token supply vests and enters the market.

Eventually, the burning will cause the circulating supply to decrease making the token deflationary. In combination with an increase in demand, this should ideally cause the price to increase. The cryptocurrency market is complicated, though, and there’s no guarantee of this increase happening.

The Kyber team is impressive. Loi Luu, Yaron Velner, and Victor Tran are the founders behind the project. Luu previously created Oyente, the first open-source security analyzer for Ethereum contracts, and cofounded SmartPool, a decentralized mining pool project. Velner has been active in the Ethereum bug bounty program, and Tran is also a lead developer at SmartPool.

The team has a well-rounded advisory board with the most notable member being Vitalik Buterin, Ethereum wunderkind.

In August 2017, Kyber successfully launched their testnet beta, and in the first quarter of 2018, released the main net. Throughout the rest of 2018, the team added support for ERC20-ERC20 conversions (KyberSwap) and created a suite of developer APIs. The next major milestone for Kyber Network is the implementation of Gormos, a scaling solution utilizing Plasma and supporting KNC staking.

The project has an extensive list of partners. The list includes Request Network, Wax, Toshi, Gifto, ICON, Wanchain, and MyEtherWallet to name just a few.

The 0x project is the biggest competitor to Kyber Network. Both teams are attempting to enter the decentralized exchange market. The primary difference between the two is that Kyber performs the entire exchange process on-chain while 0x keeps the order book and matching off-chain.

As a crypto swap exchange, the platform also competes with ShapeShift and Changelly.

After the September 2017 ICO, KNC settled into a trading price that hovered around $1.00 (decreasing in BTC value) until December. The token has followed the trend of most other altcoins – rising in price through December and sharply declining toward the beginning of January 2018.

The KNC price fell throughout all of 2018 with one exception during April. From April 6th to April 28th, the price rose over 200 percent. This run-up coincided with a blog post outlining plans to bring Bitcoin to the Ethereum blockchain. Since then, however, the price has steadily fallen, currently resting on what looks like a $0.15 (~0.000045 BTC) floor.

With the number of partners using the Kyber Network, the price may rise as they begin to fully use the network. The development team has consistently hit the milestones they’ve set out to achieve, so make note of any release announcements on the horizon.

As mentioned earlier, the fixed supply and token burning should cause natural upward pressure on the price as well.

Where to Buy KNC

KNC is most commonly traded on Binance as a trading pair with Bitcoin. You can also use Ethereum to trade for KNC, but the volume is significantly less.

For a full list of exchanges to buy KNC, head over to CoinMarketCap.

Where to Store KNC

Because it’s an ERC20 token, you can store KNC in any wallet with ERC20 support. MyEtherWallet is the most popular online option. MetaMask works as well.

Many investors choose to use a hardware wallet for additional security. You can’t go wrong with either the Trezor or Ledger Nano S – both support KNC.

Kyber Network is an interesting protocol that brings speed, security, and liquidity to the cryptocurrency exchange process. The project uniquely combines a reserve warehouse with on-chain exchanges to get the best of centralized and decentralized systems.

The KNC price hasn’t reflected it, but the Kyber team has been producing results with the releases of KyberSwap and KyberDeveloper as well as partnerships with several reputable blockchain companies. With a loaded roadmap, 2019 could be the year for Kyber Network to dominate the decentralized exchange space.

Editor’s Note: This article was updated by Steven Buchko on 12.05.18 to reflect the recent changes of the project.

The post What Is Kyber Network? | A Guide to the Asset Exchange Protocol appeared first on CoinCentral.