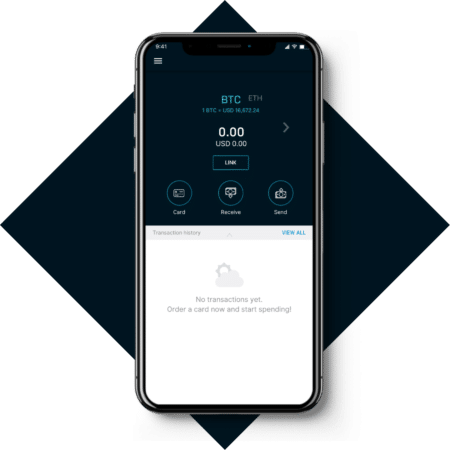 TenX is a digital wallet and physical card that you can use to spend cryptocurrency at any store – even if they don’t accept crypto.

You may have noticed that you’ve accumulated all of these coins but don’t have many places available to spend them. Besides Overstock and maybe a shop or two around town, your options are pretty limited.

TenX is on a mission to change that.

In this TenX guide, we’re going to cover:

How Does TenX Work?

The mission of the TenX team is to make “any blockchain asset spendable instantly.” To do this, they’ve built a wallet and card system on top of the COMIT network – a routing protocol that enables payments across blockchains.

The TenX wallet is available on Android, iOS, and web. This multi-currency wallet currently only supports Bitcoin, Ethereum, and Litecoin with plans to support more altcoins down the road.

You’re not able to access your wallet’s private keys for now. Instead, TenX stores them in a mixture of hot (online) and cold (offline) storage solutions that are on par with industry standards. Once the wallet is integrated with the COMIT network, you’ll have full control of your private keys. This integration was originally slated for the end of 2017. However, it has yet to occur. The TenX team now also states in a supplemental whitepaper that they are only contemplating giving users their private keys.

You can make transactions by using either the TenX app or a physical TenX debit card. Unlike some other crypto cards, all of your coin assets remain as crypto up until the time you actually make a transaction. Using a DSS, you can set spending rules for your card and have further control of your funds. You can set purchase limits, daily spending limits, and withdrawal limits.

You can also choose a portfolio of coins to use for spending. For example, you could arrange that each purchase will be split into 50 percent Bitcoin, 25 percent Ethereum, and 25 percent Litecoin.

Eventually, TenX will release developer tools for start-ups, businesses, and merchants to tie into the COMIT network. This will help TenX to expand beyond just debit cards and experiment with other asset classes like ETFs and derivatives.

Making the COMIT platform available to the public will also lead to new services such as exchanges and lending programs. The original roadmap has this feature available by Q3 2018, but the team has missed the mark on this one as well.

TenX is integrated with the COMIT (Cryptographically-secure Off-chain Multi-asset Instant Transaction) network. Although created by the same people behind TenX, the COMIT network has an entirely different website and whitepaper.

The goal of the COMIT network is to allow any new blockchain to connect to an existing blockchain by using the COMIT Routing Protocol (CRP) – a set of standards that outlines how the different blockchains communicate with one another. This is similar to how the Internet is connected across the globe through the TCP/IP protocol.

With the successful implementation of the COMIT network, you’ll be able to exchange one asset for another (crypto-to-crypto or crypto-to-fiat) instantaneously for almost zero transaction fees.

For a blockchain to be compatible with the COMIT network, it needs to have these attributes:

Most reputable blockchains already include all of these requirements.

When the User makes a transaction at an approved Business, the transaction is passed along through a network of Liquidity Providers (LPs) to determine which LP has the best exchange rate.

An LP operates across blockchains and provides liquidity to the exchanges between the different currencies. For a more detailed explanation of how the COMIT network works, please check out the whitepaper.

TenX has no transaction fees. You’re only charged a one-time issuing fee of $15 for the physical card and $1.50 for the digital card. There’s also no annual fee to use the card unless you spend less than $1000 in a year. If you don’t hit that minimum, you pay $10.

The original whitepaper outlined a rewards program for TenX holders and users. It stated that you had two ways to earn rewards:

Holders of the PAY token would receive Ethereum with each transaction on the TenX network. The company would pay out 0.5% of all aggregate transaction volume monthly to PAY holders. As the network and transaction volume grows, these payments would occur more frequently with the goal being payouts every hour.

Similar to most credit cards, you would also receive a 0.1% reward each time you use the TenX card. You would receive this reward in PAY tokens which you could either hold to receive the reward mentioned earlier or sell on the open market.

REWARDS UPDATE: This rewards program no longer exists and the team never implemented it. In October 2018, the team announced that they were rethinking the rewards program. As of this writing, they don’t have any public plans on what that will be. It may involve a completely separate token. Several community members are upset with the decision because they bought into the project with the expectation of receiving rewards in line with the above structure.

The TenX team released their final whitepaper and started their token sale at the end of June 2017.

Headquartered in Singapore, the team was founded by Toby Hoenisch, Dr. Julian Hosp, Michael Sperk, and Paul Kitti. Hoenisch, Dr. Hosp, and Kitti also worked together to develop the whitepaper for the COMIT network.

Fenbushi Capital, a major blockchain venture capital firm with Vitalik Buterin as a general partner, is an investor in TenX.

The TenX journey has been nothing short of interesting. The team launched the first card back in September 2016 in Singapore in partnership with OneBit, the issuer. In June 2017, European customers began receiving their cards.

At the start of 2018, however, things took a turn for the worse. In January, TenX was forced to find a new card issuer and hasn’t been able to do so yet. Because of this, card deployment is on hold until they begin working with a new issuer.

The team is continuing to work through the card freeze through development on the COMIT Network and wallet. In April 2018, TenX partnered with the Litecoin Foundation and in June, performed the first atomic swap between BTC and ETH on COMIT. Next steps for the company include finding a card issuer, launching the crypto cards, and adding support for more cryptocurrencies.

There are a few other companies attempting to build cryptocurrency card systems including Token and Monaco (recently re-branded to Crypto). Each card has a different reward structure benefitting different types of use-cases. TenX is unique in that it’s the only one using the COMIT network and COMIT cross-channel payments.

Just as we have multiple credit and debit card options in the traditional finance system, there’s room for multiple options in the crypto space with different pros and cons tailored to the different types of spenders.

There are currently a little under 110 million PAY tokens circulating in the market. This represents 51% of the tokens that will ever exist in the market.

An additional 29 percent (or ~59.5 million) will enter the market over the next 4 years to fund community initiatives, business development, and academic research to further enhance the product.

Of the last 20 percent, half will be reserved as an asset in the company while the other half will be used to compensate the TenX founders and employees over a 4 year vesting period.

No more tokens will be created beyond these.

The TenX PAY token spiked to an all-time high of $5.60 (0.00147972 BTC) in August 2017. The dramatic rise in price was caused by the issuance of a large batch of debit cards as well as the PAY token finally being listed on Yunbi – one of the largest China-based crypto exchanges.

Following that, the price slowly and steadily fell to the $1.50 – $2.00 range with small positive movements towards the end of November. Like almost every other altcoin, PAY reached another high at the beginning of January 2018. The price quickly rose to about $5.00 (~0.00035 BTC) before crashing for the rest of 2018.

It seems like investors are losing confidence in this project each day that a card issuer remains missing. Even an overall market turnaround may have little effect on TenX if the company can’t produce the crypto cards. Keep your eye out for the completion of the COMIT Network as well as any issuer partnership announcements. These two things are the major catalysts that could help the price.

Where to Buy PAY

You can purchase PAY with Bitcoin, Ethereum, or Tether on several major exchanges such as Bittrex and Huobi.

One strategy is to first purchase Bitcoin on either GDAX or Gemini and then transfer it to Bittrex.

You can check out CoinMarketCap for a complete list of the exchanges on which PAY is available.

Where to Store PAY

It’s recommended you store your PAY tokens on a hardware wallet that has support for ERC20 tokens like Trezor or the Ledger Nano S.

Another option for storage is MyEtherWallet where you can move your tokens to an offline paper wallet.

Weirdly enough, you can’t store your PAY tokens on the TenX wallet.

TenX is a project that garnered high expectations but has since lost much of the crypto community’s confidence. With the project over a year behind on the initial roadmap, many investors are wondering if the TenX team will ever get a card into the market. This delay, in combination with the rewards program restructuring, has left a bitter taste in many people’s mouths.

That being said, the company continues to provide updates. And, it seems as if the development team is continuing to make progress. Now that Monaco (Crypto) is shipping cards, though, they’ve lost the first-movers advantage that they once had.

Editor’s Note: This article was updated by Steven Buchko on 12.04.2018 to reflect the recent changes of the project.

The post What Is TenX (PAY)? | An All-Inclusive Guide to the Crypto Card appeared first on CoinCentral.