A month ago, traders were confident that the value of ETH would not fall below $300. But the recent fake news that Goldman Sachs was dropping plans for a Bitcoin and Crypto desk, proved to be the catalyst the digital asset needed to fall even further to current levels of $192 at the moment of writing this. All year long, analysts had predicted that ETH would plummet in the markets due to congestion issues on its network. This led to many investors shorting the digital asset through BitMEX. But many did not expect the fall to be overnight as experienced in the last week.

Information around the crypto trader community indicates that the crypto exchange of BitMEX might have had a hand in the Ethereum crash. This was after a conversation on the exchange surfaced of a BitMEX official account (supposedly of Arthur Hayes) advising traders to keep shorting ETH. A screenshot of the conversation has been provided below: 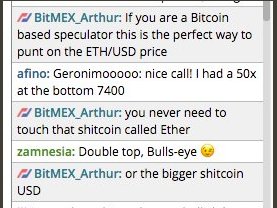 The word ‘punt’ used in the conversation above, is used in informal terms to hint at attempts to make fast profits from an investment regardless of its underlying fundamentals. This means the trader carries a high risk in the trade by speculating instant high returns. In the case of ETH, the decline was inevitable, but the shorts on BitMEX might have contributed to the digital asset falling further.

With respect to BitMEX being accused of manipulating the value of ETH, the platform has barred trading for residents of the U.S, Québec (Canada), Cuba, just to name a few. This then can be interpreted as the exchange evading the corresponding regulatory authorities such as the American SEC. This theory further pushes suspicions that their back-end operations are not as they seem. There could be more to this than meets the eye with BitMEX. Here is the chart of Ethereum ever since it was added to BitMex on August 2nd at around $400.

Many crypto analysts believe that the cryptocurrency bear market will not be over till late October this year. Other’s have postulated that we have a long 6 to 12 months of either a bear market or pure sideways movement. Both schools of thought agree that in the short term, Ethereum’s price in the market might drop as low as $155. This is without factoring in any other FUD or fake news in the crypto space.

When we add the prospects of bad news from the SEC postponing or rejecting the CBOE sponsored Bitcoin ETF, we can clearly see that ETH could be headed to a double-digit value very soon. The last time Ethereum was valued at under $100 was back in May 2017 when many of us had not even got into the crypto trading space. All we knew was that there was this new revolutionary technology called blockchain and its biggest advocate was Bitcoin.

In conclusion, the cryptocurrency exchange of BitMEX could have had a hand in further pushing the value of ETH lower than was expected. This is due to the various investment instruments on the platform that allows traders to bet against their favorite digital asset. Further looking at the situation from the point of view of the exchange’s CEO, Arthur Hayes, ETH was ripe for the picking as the preferred coin to short in the markets. With the market still a bit shaky, ETH might decline a bit further.

Check out the new Global Coin Report YouTube channel as we address all the highlights in crypto and the financial markets. With guests from all over the cryptosphere bringing you news, editorial, and of course, money making opportunities.

The post What Part Did BitMex Play In The Ethereum Crash? appeared first on Global Coin Report.