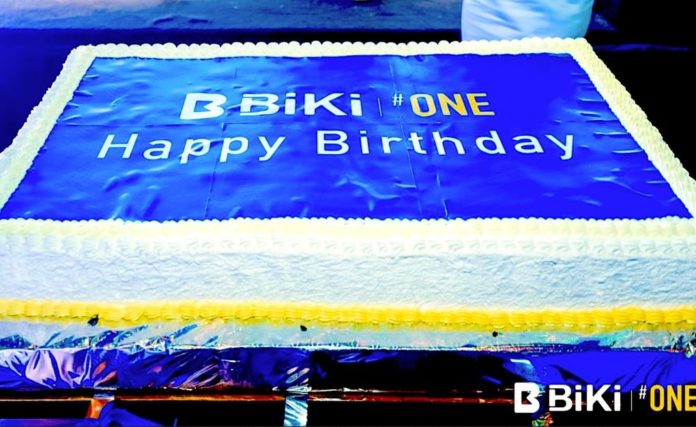 Fast-growing exchange BiKi.com celebrated the one-year anniversary of its launch with an appreciation dinner themed “All for Partners” for its ecosystem of partners, investors and community supporters. Luminaries and thought leaders of the Chinese blockchain industry such as Jinse.com CEO An Xinxin, Chainup‘s Zhong Gengfa, Mars Finance‘s Li Lao, Genesis Capital‘s Zhu Huaiyang and others showed up in full force to support the 300-strong anniversary event of the young exchange.

The past year has seen the new kid on the crypto exchange block advancing its market leadership through regional expansion strategies, innovative customer acquisition techniques as well as building value around its namesake trading coin amongst other goal-oriented initiatives. During this time, BiKi registered 1.5 million users, listed 150 projects, currently offers 220 trading pairs, and amassed 130,000 daily active users with 2,000 community partners and 20,000 highly active Wechat users. The BiKi coin has now increased 100 times, ranking among the top 8 platform currencies and the exchange ranks among the top 100 global cryptocurrency exchange market capitalizations.

At the roundtable discussion, founder of BiKi.com, Winter reviewed the milestones BiKi had attained and noted that, “Right this very moment, the cryptocurrency industry is at a turning point and entering into the mainstream consensus.”

“The exchange is the infrastructure and financial center of the entire industry,” emphasized Winter, “and can be compared to a military battleground with high-level participants competing. The many variables in the exchange industry ensures that a foregone conclusion is not yet reached and the real master has not entered the market yet.”

Basically it was any man’s game and the odds would favor the ones who were able to navigate through the uncertainties and changes in the varied crypto landscape. To turn the tide in one’s favor, it was important now that exchanges worked together with projects, VC’s, media, technical contractors, their community, to provide an ecosystem that could push for progression, empower one another and ultimately benefit the industry as a whole.

As for BiKi.com’s future, Winter summarized it in 4 areas:

Expressing his sincerest gratitude to BiKi’s top 5 community partners, Winter presented BiKi souvenirs to them while simultaneously launching a global community partners recruitment plan, hoping that this initiative will kickstart a grassroots level movement for “more friends to join BiKi, to contribute to and benefit from the ecological development of the blockchain.”

“We will always remember and acknowledge all the friends and team members who are present and who have aided us during our journey,” added Winter.

Reminding his audience that BiKi.com was an exchange forged in the tough bear market conditions, with the current market gradually warming up, Winter expressed cheerful optimism with assurances that BiKi was indeed poised and ready for the new journey and battlefield ahead.