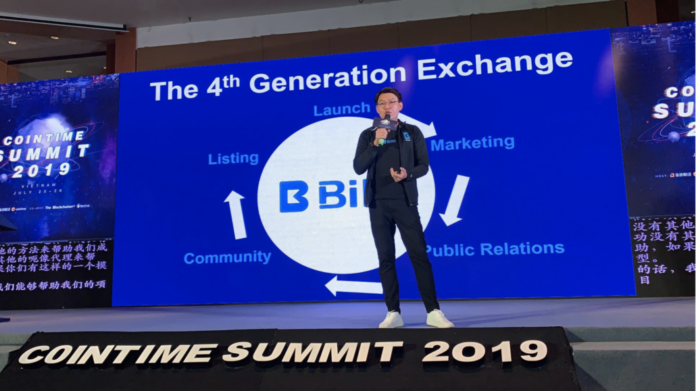 At the CoinTime Summit 2019 held in Ho Chi Minh City, Vietnam on 25th-26th July, BiKi.com Southeast Asia CEO Ethan Ng spoke on the new role of exchanges in 2019 and the benefits of interdependency between projects and exchanges, “And we found out through our model, we literally help our projects grow… There is no other way.”

With the crypto winter sieving the wheat from the chaff, only high-quality projects have remained. For new projects and tokens, trends like IEOs have also taken over to guarantee that tokens get listed on exchanges in order to prevent the scam projects from abusing the ICO craze of late 2017 to early 2018.

Yet, regardless of fundraising on either ICO or IEO, projects have two needs that will never change – increased liquidity and a growing base of token holders. For that to happen, projects need to be listed on an exchange and they need to be marketed. This is where fourth-generation exchanges step in.

BiKi has made it a point to serve both aforementioned needs while simultaneously relying on listed projects for its own growth. Being that it has a strong Chinese user base, BiKi acts as a gateway for projects who want to tap into the Chinese markets, which have their own ecosystems and barriers to entry. These projects that have survived the crypto winter usually have a growing international presence and also invariably a hoard of supportive token holders who are demanding for liquidity. There is thus obvious synergy between such projects and an exchange like BiKi who wants to move beyond the walls of the Chinese markets to become a global industry brand name.

Projects can benefit from expedited growth through listing on an exchange that wears both hats of listing as well as of marketing. In this sense, BiKi becomes more than an exchange as it helps its listed international projects bridge into Chinese markets through the exchange’s complimentary marketing services in China’s top cryptocurrency news site, Jinse.com, and its strong community outreach initiatives  to over 100,000 active Wechat audience members led by 1000 community partners. In turn, these projects can help the exchange create a name for itself on the international scene through cross-marketing as well as word-of-mouth promotion from their community of token holders. Chinese projects who list on BiKi can also rely on BiKi to penetrate the larger global market through the exchange’s international branding.

This mutually beneficial relationship between projects and exchanges is what allows fourth generation exchanges to flourish in the fast-paced cryptocurrency industry and catch up to exchange giants like Binance and OKEx.

As exchanges in 2019 begin to realize the need for collaborative relationships with projects, this trend of mutual growth and development will likely continue into the near future, until fifth-generation exchanges emerge with another unique model of their own.

Bit-Media
Catch the latest media buzz in the cryptocurrency and blockchain space from Bit-Media.