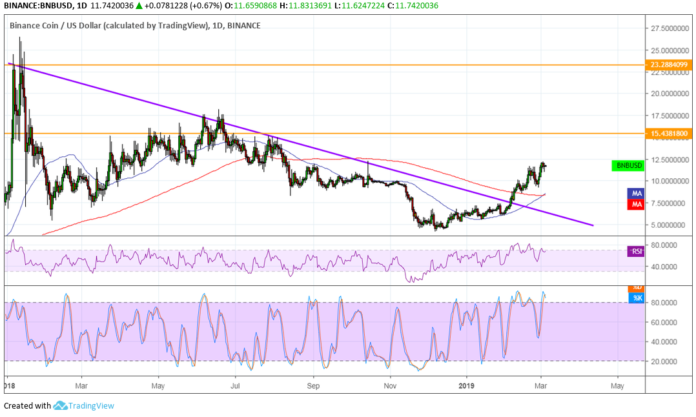 Binance Coin recently broke above its descending trend line on the daily time frame to show that a reversal is in the works. Price appears to be gaining more momentum as it set its sights on the next upside targets.

The 100 SMA is starting to cross above the longer-term 200 SMA to indicate that the path of least resistance is now to the upside. Price is above both moving averages as confirmation that bullish pressure is in play. With that, BNB could aim for the next area of interest at $15.500.

From there, sustained bullish momentum could take Binance Coin to the $23 levels and beyond. However, RSI has been hovering around the overbought zone for quite some time and might be due to turn lower to signal a return in selling pressure. Stochastic is also indicating overbought conditions and might also head south, so price could follow suit.

In that case, a retest of the broken trend line could follow before more buyers return. Support might also be found at the moving averages dynamic inflection points around the $7.500 level.

Binance Coin seems to have drawn a lot of market interest on its token launch activities, possibly looking at another ‘flippening’ as it overtakes peers in the cryptocurrency rankings by market cap.

Since its launch in 2017, Binance Coin has been able to add more than 10 million regular users and facilitate trillions of dollars in trade volume. It has also recently hit an all-time high versus bitcoin and might just be the only coin holding on to gains and going for more in the past 24 hours.

More recently, Binance CEO CZ announced that users will have the opportunity to earn BNB tokens for test driving the new platform. He tweeted:

“To test the hell out of @Binance_DEX, we are giving away roughly $100,000 USD equivalent, in REAL $BNB, as reward for our testnet trading competition.

You have nothing to lose!

Come and join the fun, and help us launch the mainnet faster!”