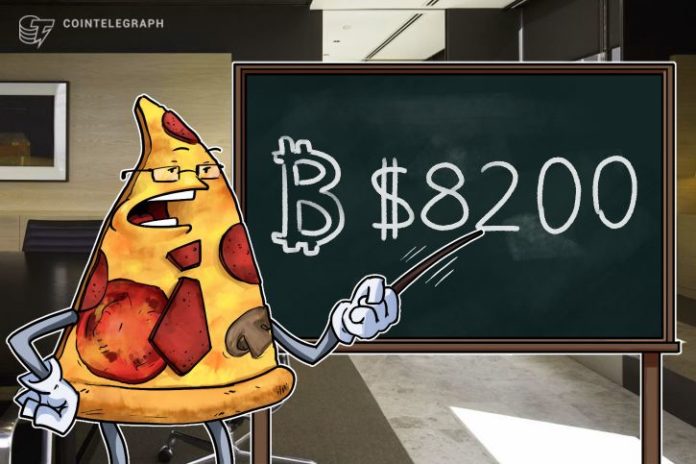 Bitcoin (BTC) users around the world are celebrating the eighth so-called “Bitcoin Pizza Day” today, May 22. With BTC prices circling $8,200, the price of one of the legendary pizzas purchased on this day in 2010 is now worth $41.4 mln.

Traditionally accompanied by various social media events, giveaways from cryptocurrency businesses and a considerable amount of pizza-eating, Bitcoin Pizza Day remembers May 22, 2010 – the first time a Bitcoin user purchased pizza with the cryptocurrency.

A ceremonial occurrence in Bitcoin’s history, Hanyecz’s fateful transaction has garnered more admiration than ridicule. Commentators later noted that without such pioneering usage, Bitcoin would not have scaled to the phenomenon it is in 2018.

“I’ll pay 10,000 bitcoins for a couple of pizzas.. like maybe 2 large ones so I have some left over for the next day. I like having left over pizza to nibble on later,” Hanyecz wrote on Bitcointalk in 2010, attempting to find support for the transaction. The famous post continues:

“You can make the pizza yourself and bring it to my house or order it for me from a delivery place, but what I’m aiming for is getting food delivered in exchange for bitcoins where I don’t have to order or prepare it myself, kind of like ordering a ‘breakfast platter’ at a hotel or something, they just bring you something to eat and you’re happy!”

Responses to the original post from November 2010 make for equally interesting reading, users asking Hanyecz what it felt like to eat pizza now worth $2,600 and wondering whether the order would ever become the “world’s first million-dollar pizza.”

This year, meanwhile, community infographics accompany celebrations from crypto businesses, including exchange BTCC, which noted the sliding scale of expenditure on its annual pizza delivery.