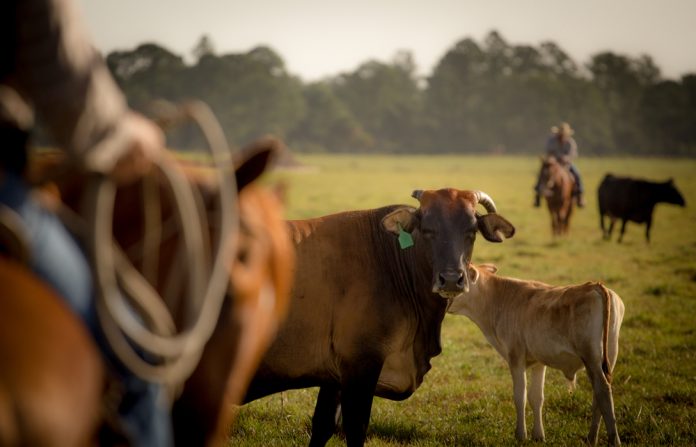 Is it really in, what’s on the package? Thanks to the Blockchain, customers soon have a clear record of where food originates and who processed it. Some shops are already introducing a blockchain requirement.

Wyoming is the state of the cowboys: over one million cows graze in the endless meadows of the northwestern US – and more and more of them have a special chip in their ear.

Because the cowboys have recently discovered the blockchain for themselves. “This technology will change our lives,” says Rob Jennings in an online video. He is the founder of Beefchain, one of the first Blockchain agricultural companies.

However, Jennings does not have much in common with the computer freaks and businessmen who deal with the revolutionary invention in Switzerland. He wears a cowboy hat and speaks with an accent that is otherwise only heard in western films. But he is also convinced of the potential of the technology. “Blockchains enable us to document in detail what our cows eat, how they are kept and when they are transported,” he explains.

It’s enough for farmers to scan the electronic chips that the cows have in their ears. In this way, the whole life of an animal is stored in the blockchain – and everything that comes afterwards.

The database includes, among other things, where the animal was slaughtered, by whom the meat was processed and when it was shipped. “At the supermarket, customers can then scan in a code with their mobile phones and retrieve this information online,” explains Beefchain founder Jennings.

The big advantage: Entries in the blockchain can not be faked or manipulated. You do not have to trust food labels that you do not really know what they mean, but can convince yourself of the origin of the meat.

This ensures that what’s really on the package is really there. The Cowboys from Wyoming want to use this as a quality feature for their products.

In addition to American cowboys, international mega-corporations are pursuing this approach. For example, Walmart, the world’s largest chain store, has launched a similar platform for vegetables. As of September 2019, one only wants to sell individual products if processing and transport have been documented in a block chain.

The principle also works in all other sectors. For example, Novartis is experimenting to capture drug production in this way.

Even the industry of online casinos is implementing blockchain in the software development of the games.