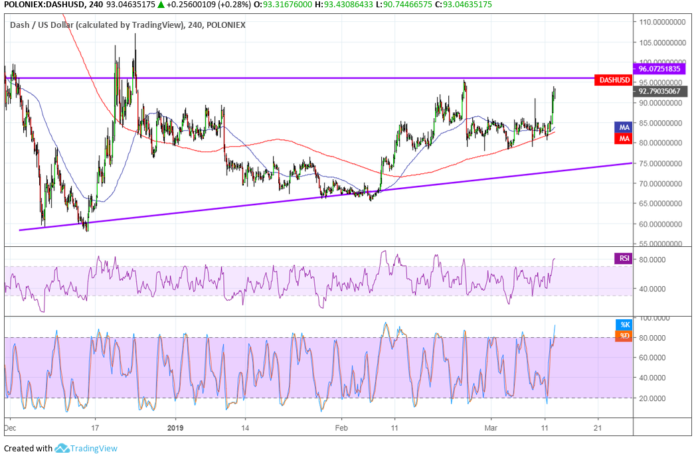 Dash has been trading inside an ascending triangle visible on its 4-hour time frame with its higher lows and resistance close to $100. Price recently enjoyed a strong run that could put it on track towards attempting to break past the resistance.

The 100 SMA is above the longer-term 200 SMA to indicate that the path of least resistance is to the upside. In other words, resistance is more likely to break than to hold. The moving averages are holding as dynamic support levels as well, but the gap is still pretty narrow to hint that a bearish crossover might be possible.

In that case, Dash could fall back to the triangle bottom around $75. On the other hand, a break past the top could be followed by a rally that’s the same height as the chart formation, which spans around $40.

RSI is already indicating overbought conditions, though, or that buyers are tired and willing to let sellers take over. Stochastic is also in the overbought region to signal exhaustion among buyers and a possible return in bearish pressure.

Dash is currently among the top performing cryptocurrencies and the gains are being attributed to the release of Dash Trust Protector election software.

“Even if a vote is cast with an address that isn’t currently an active MN (e.g. might be down for maintenance), as long as that MN collateral address is in the list as of March 31st when the snapshot is taken, the vote should be considered valid.”

Another positive factor was the inclusion on Blockchair as its seventh explorer, enabling traders to find transactions, sort and filter the Dash blockchain data easily.

Further developments in the space could drive the value of Dash higher, especially since other coins are either in consolidation or correction mode so far this week.