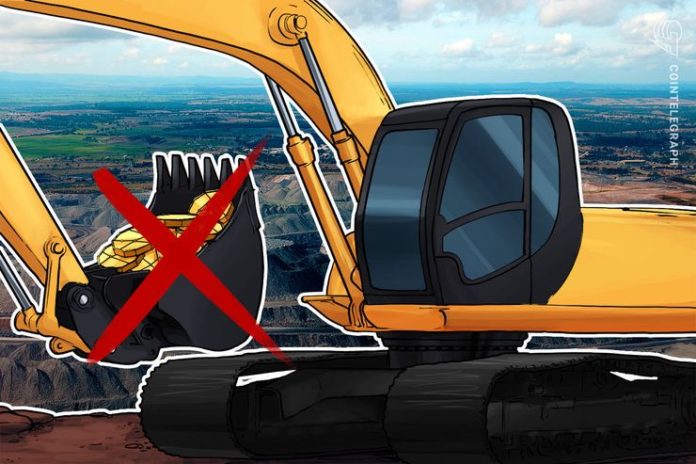 The city of Ephrata, Washington, will halt new crypto mining developments in the city for the next 12 months, Eastern Washington and North Idaho daily newspaper The Spokesman Review reports Friday, Oct. 19.

The recently announced suspension will only affect new crypto operations from being established in Ephrata, while the existing four businesses already there will continue operating. According to Ephrata city administrator Wes Crago, those four crypto operations — including two at the Port of Ephrata, one in an industrial area of the city, as well as one in a residential area — are being relocated at the moment.

The decision for the suspension was taken by a city council vote, with six council members voting in favor of the new cryptocurrency regulations, and only one commissioner, Matt Moore, voting against.

Moore noted that even a temporary ban can pose a threat for the city’s economic development since it puts the industry “outside the city’s expertise,” adding that he does not want to “surrender any economic opportunity big or small.”

Council member Kathleen Allstot clarified that the new ban implies taking a one-year “break” in order to see “see what’s going” in the sphere, as well as to find out how mining fits both in Ephrata and the Grant County Public Utility District (PUD).

Crypto mining operations have become increasingly popular in the cities of the Columbia Basin due to the region’s cheap electricity sources. However, the growth of crypto mining developments in Ephrata has created some inconveniences for the residents, with some reportedly suffering a lack of electricity due to the operation of the high energy-consuming cooling equipment by the local crypto miners.

Ephrata’s recent move goes in line with crypto mining-related regulations imposed by a number of cities in the Grant County PUD, the article notes. In addition to the suspension, Grant Cities has developed new – and sufficiently higher – electricity rates for crypto firms, with the new rates set to be enforced in April 2019.

Washington state is reportedly one of the leading crypto mining sites in the world, with one of the biggest mining farms, GigaWatt, located within its borders. The U.S. state currently offers the cheapest power in the country, with $9.56 per kWh for individuals and $8.42 per kWh for businesses.

In late July 2018, Franklin PUD commissioners approved a moratorium that will provide staff with extra time to investigate the impact of mining on the electrical system before accepting applications for electricity from crypto mining companies in rural Washington.