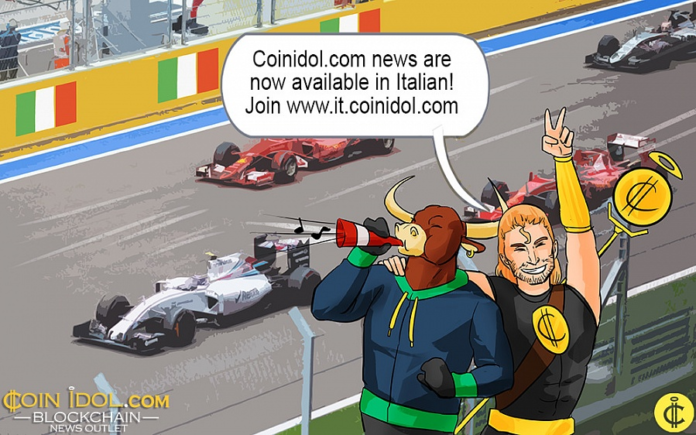 15th January, 2019, Larnaca, Cyprus: The first articles were uploaded in December 2018, but the month of the official launch for the Italian public is January 2019.

The Italian version of Coinidol provides news on Blockchain, Cryptocurrency and FinTech with a focus on the local market in Italy and other Italian speaking regions worldwide. That’s around 90 million potential readers all over the world.

The rise of Blockchain in Italy to come
Now Blockchain, Bitcoin and other cryptocurrency news in Italy are reaching new levels and value, especially since the government has decided to invest 1 billion EURO in the development of Blockchain tech by launching a special investment fund in February 2019.

At the moment, Italian investments in startups in this field are only around 130 million per year. But this move from the government of Italy is a game changer.

The main English version of Coinidol has 1/2 million pageviews from readers and 1% of them are from Italy. This is a good point for development.

George Gor, CEO of Coinidol.com commented on the start of it.coinidol.com:

“It.coinidol.com will inform 90 million Italians all over the world about Blockchain, Bitcoin and FinTech news.

The Italian team, headed by editor Marco Maltese, will dig deep in all possible local news sources about Italian speaking individuals and companies involved in Blockchain, Cryptocurrencies and FinTech in such regions of the world as Italy, Switzerland, San Marino, Vatican City, Slovenian Istria (Slovenia), Istria County and Dalmatia (Croatia), Kotor (Montenegro) and Corfu (Greece), where the people used to speak Italian.

Coinidol thank their old Italian speaking friends and partners, who have followed them and supported their project before

Marco has been a team member from 2014, before Coinidol.com was started. Marco is a pioneer of the Italian market for blockchain and Bitcoin. His vivid articles can be also read in English here.

Coinidol will Support the Italian World of Blockchain
Coinidol welcome several audiences as potential partners, heroes of our articles and readers:

1 – Italians that live not in Italy, but do blockchain projects abroad

2 – Italian blockchain projects, which are launched and developed in Italy

3 – Active leaders of the blockchain market in Italy

4 – Organizers of Blockchain, Crypto or Bitcoin events, meetups, conferences or summits ONLY in Italy or in Italian speaking regions of the world

5 – Political and non-commercial organisations, that are interested in the development of the Blockchain market in Italy.

Coinidol will try to support any initiative in the space of Blockchain in Italy and talented Italians all over the world if they are experts in Blockchain.

If readers find themselves as part of this audience and have any PRs, news or comments to share with our editorial team, please send emails to: [email protected]

Bitcoin PR Buzz is the source of this content. Virtual currency is not legal tender, is not backed by the government, and accounts and value balances are not subject to consumer protections. This press release is for informational purposes only. The information does not constitute investment advice or an offer to invest.

For the second time in a little over a month, Venezuela’s president Nicolas Maduro has hiked up the value of...