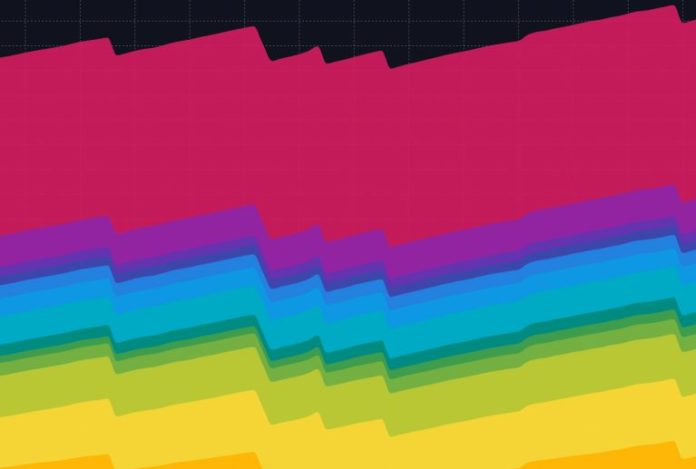 Last month the Veriblock testnet represented more than 30 percent of BTC’s network transactions but the project took a hiatus before launching the protocol’s mainnet. When the project stopped, the BTC network’s mempool dropped, transactions per day were cut in half, and fees slightly dipped. However, since the mainnet launch of the Veriblock blockchain, the mempool is once again getting ‘spammed’ and average transaction fees have increased over the last few days.

The Veriblock blockchain launched its mainnet on March 25, and since then the project has been using a lot of BTC transactions again. News.Bitcoin.com reported on the Veriblock testnet back in February when the blockchain platform was piggybacking off the chain and utilized more than 30-45 percent of transactions on a daily basis. Often times last month, BTC transactions per day numbered 285,000-350,000 when Veriblock was testing.

The Veriblock chain is a project that aims to “help secure blockchain networks against 51% attacks so they can thrive.” The project uses a system called proof-of-proof (PoP) and the ‘proof’ is tied to the OP_Return transactions used within the BTC network. Essentially Veriblock can create a snapshot of any chain state and secure it with BTC in a transparent and permissionless fashion. When the mainnet launched, the Veriblock team explained that it is committed to helping other blockchains fend off malicious attacks.

The team mentioned the 51 percent attacks and deep reorgs that happened to Bitcoin Gold, Zencash, Ravencoin, FLO, Vertcoin, and Ethereum Classic as recent examples. Veriblock says that cryptocurrency development teams can now concentrate on programming new features, instead of stressing about attacks. “The marketplace has validated this approach, with over 6,000,000 security transactions on Bitcoin to date,” Veriblock claims.

Last time Veriblock used a very noticeable amount of BTC transactions, many hardcore maximalists didn’t like the use of the opcodes and accused the project of “spamming” the network. Developer Jameson Lopp called the project “inefficient” at the time and others called it “garbage.” With the recent Veriblock mainnet launch, spectators are noticing the “fee pressure rises” and others have started getting salty again. There are others that see the fees as positive because they could kickstart Segwit adoption and force people into using the unfinished Lightning Network. For instance, one observer tweeted:

Seems like Lightning channel opens and Veriblock PoPs will make up the majority of transactions soon — This could force exchanges to look into adopting Lightning sooner rather than later.

Op_Return transactions have been very popular throughout the community lately and other blockchains like Bitcoin Cash (BCH) have been using them widely as well with concepts like token creation and platforms like Bitcoinfiles.com and Memo.cash. In fact, OP_Return transactions have been popular throughout the Bitcoin economy since 2013, when people became fascinated with tethering bits of data into transactions to benefit from the blockchain’s immutability. However, some people have taken issue with people using BTC for arbitrary data and have called these transactions whimsical and unneeded spam. With the fees rising and BTC’s transaction congestion in 2017, it caused people to reveal their subjective valuations on what they think people should spend BTC on — to the point where a coffee purchase with bitcoin is considered infeasible.

Supporters of the BCH network believe that a focus on improving onchain scaling is a far better method than forcing people to pay high network fees and onboarding people onto an unfinished and insecure network. There are not many BCH proponents who take issue with people paying for transactions in a permissionless manner, even if it’s aimless and arbitrary information. Moreover, the BCH network has proved it can handle a significant surge of onchain transactions when it processed more than 2 million transactions in 24 hours on Sept. 1, 2018. In fact, the chain continued to process record-breaking daily txns per day that entire week and miner fees declined instead of doubling. It’s hard to say whether or not BTC’s increasing network fees and Veriblock paying for a large portion of transactions will push people toward the Lightning Network or towards other chains as it has done in the past.

Russia's "richest man," metal magnate Vladimir Potanin, explained in an interview his plans for the tokenization of the precious metal...