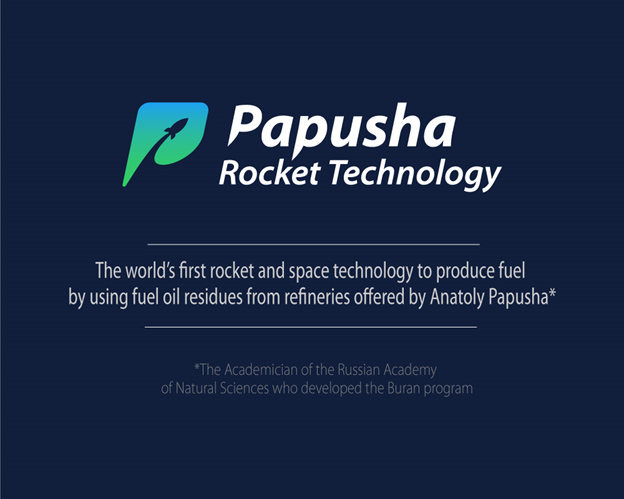 Bitcoin Press Release: Fusion of blockchain, ecology and space technologies is the next step of the civilization development —this is the main idea of Papusha Rocket Technology project creators.

August 11th, 2018. Moscow, Russia. The innovative installation, developed by famous Soviet and Russian scientist Anatoly Papusha and named PRT-1, was capable of doing what was previously unimaginable — converting practically unused oil production high-toxic waste into reusable products like gasoline, kerosene, diesel fuel and very valuable synthetic oil. Every inhabitant of our planet can not only take part in the global environmental project, but also get significant profit. Papusha Rocket Technology allows each person to earn money by helping the environment in any developed country.

Advanced Space Technologies Belong to Everyone

For the worldwide distribution of this technology the Papusha Rocket Technology Token Sale, which has no analogues in the world, was launched. By enlisting the support of the audience, project team can consequently reduce the amount of waste from the oil industry and solve one of the global problems of mankind!

“I believe the ICO format and decentralized ownership of the project’s tokens will allow the most rapid and qualitative solution of modern ecology and energy problems ”.

In PRT case, running the Token Sale is the most transparent and honest way to secure financing and development of the project. It is for this purpose that Papusha company released PRT token, which will be explained further. Main goal is decentralization the investments in the project so that the technology can be available worldwide and managed by its developers team, and not become the property of any government or investor.

How Exactly Does It Work?

Papusha Rocket Technology team have developed a transparent and effective scheme for the introduction of the project around the whole world: every country facing the problem of inefficient oil waste processing will be interested in the project.

The profit economy is simple and elegant:

Thus, having sold 6,200 PRT-2 units in 3 years, which is slightly more than 7% of the market’s needs, Papusha Rocket Technology team will spend 883 million dollars to re-buy tokens from the exchange. It will lead to the increase in PRT price up to 3,000 times!

Start date of the crowdsale – August 22.

Anatoly Papusha gathered leading Russian scientists and academicians in the field of space technology, chemistry, economics and ecology around him. Apart from that, project team have dozens of experienced marketing and blockchain specialists, who work hard for the successful project development. More information about Papusha Rocket project team on the website and Whitepaper.

The team is sincerely believe that the pervasive introduction of Papusha Rocket Technology will be a triumph of decentralized economy and a new milestone in the ecology science.

Papusha is the source of this content. Virtual currency is not legal tender, is not backed by the government, and accounts and value balances are not subject to consumer protections. Cryptocurrencies and tokens are extremely volatile. There is no guarantee of a stable value, or of any value at all. Token sales are only suitable for individuals with a high risk tolerance. Only participate in a token event with what you can afford to lose.

Another US City Imposes a Moratorium on Crypto Mining

The city of Salamanca in the U.S. state of New York is reportedly establishing a moratorium on cryptocurrency mining operations...