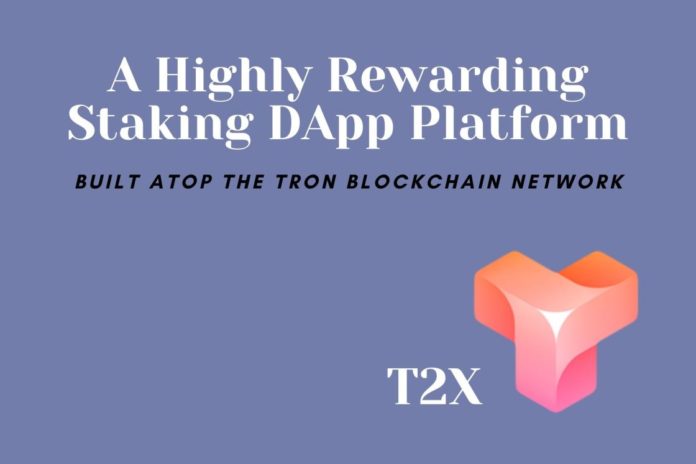 Cryptocurrency staking is one of the most rewarding proposals that attract investors to a crypto platform. However, the thing with some existing crypto staking platforms is that investors don’t have enough flexibility with the staking amount or the staking period.

Drawing ideas from the previous staking platform, T2X in the new platform, plans to bring a revolution in the crypto staking world. T2X is a highly lucrative staking App platform featuring a user-friendly UI and is exclusively focused on STAKERS.

Besides being fully transparent and secure, what makes T2X unique is that the staking portal is controlled using smart contracts on the Iron blockchain network. Owners of T2X who are staking their tokens on their portal receive daily interests along with a small percentage of the overall value of T2X that enters the Auction Lobby daily.

Nearly 95% of the Tron (TRX) that goes daily into the Auction Lobby is distributed back to the stakers. Thus T2X is only a few of those staking portals that distribute heavy rewards to the platform stakers.

Getting Freedom from Slow Payments and High Transaction Fee

The T2X tokens have been specifically designed for speedy transactions without waiting for the transactions to confirm. Rather, it makes a perfect use-case for bringing crypto to daily payments and in the mainstream. Besides, another major USP of T2X is its low transaction fee.

The advantage of owning T2X is that by owning the tokens, users can further stake it to receive rewards in their accounts. The T2X token price is solely derived from the market factors of purchase and demand. Besides, there’s no MAX supply or maximum cap for holding T2X and users can anytime swap it for Tron (TRX). This can be done seamlessly using the XSWAP feature on the platform.

This smart contracts-driven staking portal offers a very lucrative staking model. Apart from offering daily interests on the Stakes, users are incentivized to hold the T2X tokens for a long period of time through new bonus features, TRX dividends and much more.

There are four ways of acquiring and earning the T2X tokens.

In partnership with the Void Development Team, the T2X Team has built its own swap exchange XSWAP. The platform allows investors to effortlessly buy and sell their T2X tokens against any listed pairs.

The Xswap exchange pools the trading fees and distributes it for Liquidity Providers dividends and Daily Auction Lobby Buy Backs. The T2X tokens purchased through action lobby as part of the buyback from XSWAP fees, shall be burned.

The XSwap swapping portal implements Void platform’s key features like anti manipulation measures. These measures are aimed at protecting liquidity providers and safeguarding the overall price of any T2X listed pairs from any pump and dump or price manipulations. This instills reassurance among investors and helps them to invest with confidence.

Also, as part of the anti-manipulation measures, the XSwap exchange has also implemented transaction limits and liquidity limits. This protects investors against any massive pump and dump.

As said earlier, T2X staking portal has been specifically designed for STAKERS and providing them absolute flexibility. Users can have multiple stakes at a time and even end their stakes early if required.

Note, once the user starts staking his/her T2X tokens, they can’t modify the stake. The minimum staking period has been kept as low as just one day. Users can stake their T2X tokens for any fixed number of days and earn interest on that. However, it is advised that for users to be eligible to earn staking bonus, they need to stake for a minimum of 5 days. Otherwise, stakers can lose some of their T2X in case they end staking early.

Every day, a staking pool for T2X tokens is calculated and shared among all the open stakes. Based on the staking tokens amount, the users withdraw their T2X tokens with interest at the end of the staking period.

These auction lobbies are basically daily auctions offering T2X tokens against the TRX depending on the T2X and TRON pool at the end of each day. The auction lobby for T2X pool starts at 5 million T2X tokens per day and will go up to 1 million over the next 365, but not lower than that.

Currently, staking remains the main area of focus for the T2X platform. But as part of the long-term goal, the T2X ecosystem will continue to expand, offering newly created DeFi smart contracts and Games.

The concept is creating an engaging and rewarding platform simultaneously for all the stake holder, and at the same time creating a wide-scale use-case for the T2X tokens. Thus, T2X aims to become the next leading DApp on the TRON blockchain network.