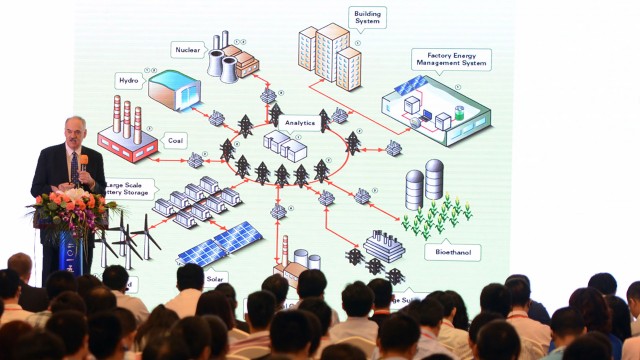 Two paths, one goal: The Industry 4.0 Platform and the Industrial Internet Consortium (IIC) are digital allies. The inspiration to work together on standards for networked industry came from Bosch, a member of both initiatives.

A new limitless Internet of Things

When the Industrial Internet Consortium (IIC) launched in 2014, it was a global consortium, founded by multi-national conglomerates to drive the adoption of the industrial internet. In three short years, its membership has grown to nearly 300 companies across more than 30 countries. “Those of us in the technology industry know that technological advancements are achieved when organizations, public and private, domestic or international, work together,” says Richard Soley, Executive Director of the IIC. In his view, it’s about integrating across systems, applications and borders. “Technology in general, and IoT specifically, doesn’t respect borders.”

“And so,” Soley says, “Volkmar Denner is right when he writes about the Spirit of Openness:”

“Today, we connect not just billions of people, but billions of things as well. This will trigger data-driven solutions, in manufacturing just as much as in smart homes and connected cars. And again, these solutions will not be the work of a single individual, but dependent on open exchange among the companies involved — large and small, young and old, wherever they are in the world.”

Working together on a revolution

The IIC is not a national initiative but rather an international organization with members all over the world: Our Steering Committee Chairman is from a French company, Vice-Chairman from a German company, and there are Japanese, Chinese and American companies on the Committee as well. Most importantly, our members and projects are spread all over the world.

“The collaboration between the IIC and the Industry 4.0 Platform brings together key factors to make networked industry a reality.”
Richard Soley, CEO, Industrial Internet Consortium

The IIC is not driven by competition, with all parties aiming to complement one another. In reality, everyone works closely together, for instance in the field of technology, in order to make life easier for suppliers and users on the markets. “It’s the nature of technical organizations to create multiple architectures and security frameworks. Our job is to minimize differences and maximize interoperability between them,” says Soley. To achieve this, the IIC and Industry 4.0 Platform coordinate various joint technical groups.

Dr. Richard Mark Soley is Executive Director of the Industrial Internet Consortium (IIC). He is also head of the Object Management Group (OMG) — an international, non-profit computer industry standards consortium — and Executive Director of the Cloud Standards Customer Council, an end-user advocacy group. As a tech-savvy visionary, the trained IT expert and engineer from Baltimore is a popular speaker. Testing environments are another area where the IoT knows no bounds. Bosch has been involved in the IIC’s first European testbed since 2015. The goal here is to manage tools in manufacturing and maintenance environments by tracking people, parts, tools and work in progress, in some cases locating within five centimeters. Each partner brings their own expertise to the project: Bosch supplies the tools and the IoT platform; Cisco takes care of the location identification feature; Tech Mahindra is responsible for the application programming; and SAP provides data analysis and visualization. For instance, the Bosch factory in Traunreut, Bavaria, has forklifts equipped with sensors to optimize their usage and prevent empty trips, predict when maintenance is required, and avoid collisions, among other things.

“As I travel the globe, I am reminded that IoT has the ability to bridge companies and countries — and that technology does not respect borders.”

“These technological advances would not have happened without global partnerships,” says Richard Soley. The IIC currently has 27 such testbeds, with almost the same amount again under development. A distinctive feature of these testbeds is that they were created by global partnerships, and promote the openness that the technology community is known for.

Networked industry calls for a language that all machines in the digitalized world can understand. To achieve this, the leading initiatives IIC and Industry 4.0 are working side-by-side. The goal is to ensure a smooth network, made up of production, logistics, building and energy management.

Trustworthiness is the core of security and privacy. I joined the IOTA project because it’s the right solution for providing trustworthiness — properly and safely distributed — for new architectures like IoT and cryptocurrency. And it’s and honor to work alongside such a brilliant and dedicated team!

We are absolutely thrilled to have Richard Soley join the IOTA Foundation as a supervisory board member and advisor. He has provided us with a lot of valuable insight stretching back to early 2017 already, to have him join in an official effort is a incredible and exciting. There’s plenty of plans in the making which he is directly involved in. Few people in the world can match Dr. Soley’s list of merits and experience in developing standards in CS and IoT or building organizations and alliances with multiple stakeholders involved. Give him a warm welcome!

Industrial Internet Consortium – “The internet of things knows no bounds” was originally published on bosch.com.The IOTA-News Community curates, examines, and summarizes news from external services while producing its own original material. Copyrights from external sources will be credited as they pertain to their corresponding owners. The purpose is to make use of 3rd party content or pictures as either allusion or promotional endorsement of mentioned sites. If you have a claim of copyright infringement with respect to material, please mail to support[at]iota-news.com. IOTA-News.com is a community run website and is NOT affiliated with the IOTA Foundation in any way.

The post The internet of things knows no bounds by Richard Soley appeared first on IOTA News.

Just days after IOTA (MIOTA) partnered with UN and UNOPS, the IOTA foundation has announced releasing of the long awaited...