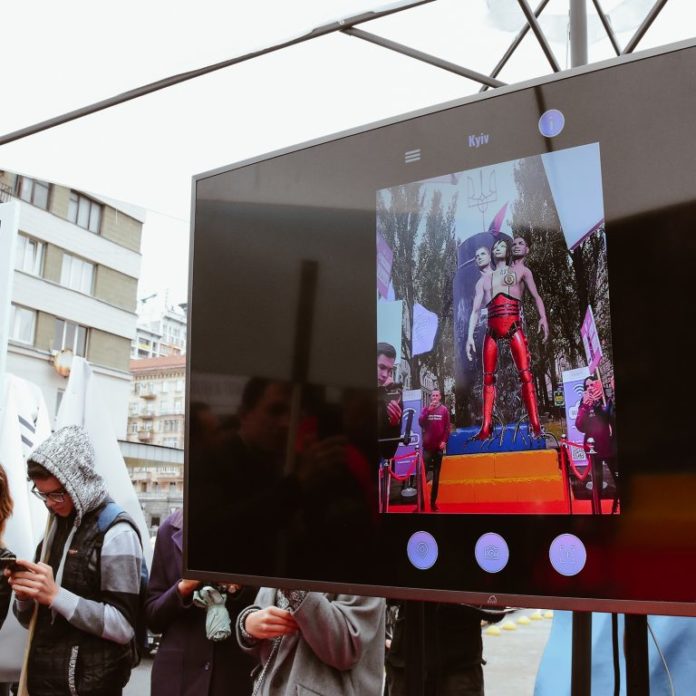 A Ukrainian project group has erected a statue of Satoshi Nakamoto, the pseudonymous founder of Bitcoin, in the virtual reality (VR) of a mobile app they have developed. The plan is to construct a network of virtual cities around such statues and ultimately establish a global “Satoshi Nakamoto Republic.” The monument can be seen on smartphones pointed at the empty pedestal in central Kiev where the imposing statue of Lenin used to stand for decades before it was toppled by protesters in 2013. The new Satoshi Nakamoto monument now greets residents and guests of the Ukrainian capital at the intersection of Taras Shevchenko Boulevard and Kreschatik Street, right across from the landmark Bessarabsky market. Those who have downloaded and installed the Satoshi Nakamoto Republic app, already available for Android and iOS devices, can enjoy a 360-view of the statue and take a selfie in front of it. In the app, they’ll see a three-headed virtual figure with a Robocop-style bottom half and a politically correct top half representing different genders and races. It has a Bitcoin symbol stamped on its bare chest and Vitalik Buterin’s face tattooed on the back.

The statue was inaugurated after a colorful procession through the streets of Kiev, with supporters waving the sky-blue banners of the republic and holding signs reading “Return the Rate of $20,000 for One Bitcoin” and “We Want Pension in Bitcoin.” The digital Nakamoto didn’t look too outlandish in the company of some of the characters in the crowd — yes, Santa Claus was there, too. During the opening ceremony, Alexander Soroka, founder of the Satoshi Nakamoto Republic, spoke about the ideas behind the installation and why Ukraine has become the first country to honor the creator of Bitcoin in such a unique way. The event was attended by local officials such as Yuri Nazarov, director of the Department of Information and Communication Technologies of the Kiev municipal government. Representatives of innovative businesses also showed up, in addition to foreign guests such as the founder of Coin Japan, Satoshi Mishima. Next Nakamoto Statue to Show Up on
Hollywood Walk of Fame

The authors of the project plan to build a network of virtual cities, starting with a statue of Satoshi Nakamoto in the central, virtual square of each municipality. In the augmented reality (AR) of these cities, participants will be able to create virtual objects and avatars, purchase virtual plots of land and other property, construct or lease buildings and buy advertising space on billboards. All of these will be seen through smartphones and AR/VR glasses running the special application, after users scan a QR code.

According to a press release, Andrey Moroz, co-founder of the Satoshi Nakamoto Republic, has been appointed as the first mayor of the virtual Kiev city. He will be responsible for coordinating the installation of VR objects and providing advice to potential investors on the acquisition of land and property. The republic is currently looking for “founders” around the world who are willing to buy the first virtual plots. The second virtual monument devoted to the enigmatic creator of Bitcoin will be installed on the Hollywood Walk of Fame in Los Angeles on Nov. 3 this year, the project’s representatives announced. The Ukrainians claim they have already found supporters for the next virtual statue to be erected in Miami, Florida.

What do you think about the Satoshi Nakamoto Republic project and its virtual statues of the founder of Bitcoin? Tell us in the comments section below.