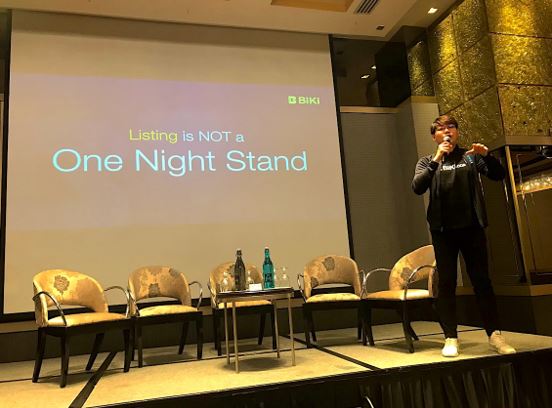 19th December, 2019, Singapore – 2019 has been a turbulent year for the cryptocurrency space. If there’s anything to be learnt about the crypto markets, it’s that it is highly volatile and unpredictable. While that might not be appealing to some, for others it is the opportunity of a lifetime to ‘strike gold’, and some millionaires have actually been made, buying and trading crypto  around the world.

Against this backdrop of speculation, significant developments in technology and economics have evolved. At Thailand Blockchain Week, Ethan Ng, Southeast Asia CEO of BiKi.com spoke about the evolving landscape in the industry.

So what is the next innovation?

“I believe it is an upcoming shift to CBDC (Central Bank Digital Currency), which is a digital payment token issued and fully backed by a central bank and is legal tender,” stated Ng. “The IMF published a paper in November 2017 encouraging central banks to experiment with CBDCs at the Official Monetary and Financial Institutions Forum (OMFIF) meeting in October 2019. The First Deputy Governor of the Bank of France also stated that central banks should not refrain from experimenting with different forms of CBDC, with a higher potential from his perspective, for wholesale CBDCs in Canada, Singapore, Marshall Islands and China.”

Ng believed that with increasing government regulations, multi-national corporations (MNCs) will be attracted to the crypto and blockchain space, which, in turn, will bring in small-medium enterprises (SMEs). From Gartner’s Hype Cycle, while mistakes will be made through this wave of innovation, corrections will follow. This macro to micro move will bring “true value” that impacts at the level of individual daily lives and encourage more innovation in the space, eventually improving everyone’s lives.

And BiKi will be positioned for that future, according to Ng.

How BiKi Grew So Fast in Less Than a Year

Starting with the exchange’s users, Ng said they were “unique” and explained that they were new-to-crypto users from all over the world, a market that has been largely untapped by other exchanges. They joined BiKi during the bear market of 2018 and have become incredibly loyal users, having benefited while growing their trades through the crypto winter together with the exchange.

As a community-driven exchange, community partners earn 60% of referral trading fees, which is more than what BiKi gets and more than what other exchanges offer. This is central to BiKi’s landmark “Community Fission model of scaling”, which has been instrumental in its community growth.

“Listing is not a one night stand,” insisted Ng. “Many exchanges stop paying attention after listing, not here at BiKi – we treat listing as the beginning.”

Ng noted that getting traction for projects requires consistent work – there are no shortcuts. Exchanges that think their job is done after listing fees are paid are not being accountable to their traders down the line. BiKi builds the project’s local community with active members from the exchange, many of whom form the trading community for that token.

“BiKi automatically helps projects publish their press updates on top media as well as within our WeChat communities to inform our traders about the tokens they invested their money in,” said Ng. “So it is a win for the projects, win for the traders and win for the exchange too.”

Headquartered in Singapore, with operations in 6 other countries including Vietnam, Korea, Japan and Russia, BiKi Exchange has more than 100 people total on its operations team.

The past few months of globalization initiatives has also seen the exchange secure BiKi Partner Nodes and media partners all around the world, extending their reach into local communities globally.

Meanwhile in China, the BiKi Research Institute and BiKi Fund and Incubator have been set up. The former serves to conduct in-depth research on the technology, applications and future development of the blockchain industry, while the latter supports the innovations of blockchain projects that show potential.

In the future, BiKi will expand further into South America and Australia, ramping up globalization efforts to increase market share. Overall, BiKi will strive to provide secure, stable, reliable and convenient digital asset trading services to their users worldwide.

Focus on Growth Not Listings

“We are expanding our ecosystem beyond just spot trading,” said Ng. “We have a Proof-of-Stake (PoS) mining pool which has the highest annualized return rate of 20%; we have a research institute and soon we will have an incubator, a lending business, leverage business and more.”

“BiKi is positioned for the future,” Ng stated matter-of-factly. “When the next bull run comes, we will be ready. My name is Ethan, you can add me on WeChat or Telegram and talk to me about growth, not about listing. Thank you.”