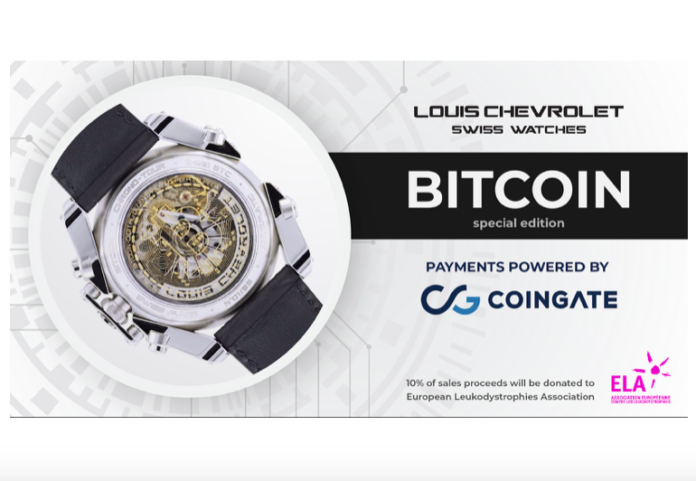 Louis Chevrolet Swiss Watches and Bitcoin and Altcoin payment processor CoinGate join forces for a charitable cause. The sales of the new chronograph by Louis Chevrolet will contribute to the research for leukodystrophies treatment backed by the European Association Against Leukodystrophies. André Saunier, the CEO of Louis Chevrolet says: ‘We’re so proud to support ELA actions. We will donate to ELA Switzerland 10% on each “Louis Chevrolet Chrono-Tour Bitcoin Special Edition“.’

Earlier this year, Louis Chevrolet Swiss Watches has launched a limited edition of 99 chronographs that are specifically developed for Bitcoin enthusiasts. Each timepiece has a unique design and can be bought only with a major cryptocurrency, Bitcoin. CoinGate, as a cryptocurrency payment processor, secures every transaction and provides information about the exchange rate. The exact amount of bitcoins paid at the time of the purchase is engraved on the back of the piece, what makes every watch different. Dmitrijus Borisenka, the CEO of CoinGate has stopped in Switzerland to witness the watch on its launch: ‘The design of the Bitcoin chronograph is astonishing and it perfectly depictures the value of cryptocurrencies. The fact that a part of the sales will go for a charitable cause makes it a unique product for crypto-enthusiasts with big gains on Bitcoin investments during the last years to contribute to an important issue.’

Before, CoinGate has reported on its direction towards promotion of cryptocurrency adoption among businesses. Dmitrijus Borisenka says: ‘The adoption of the cryptocurrencies is highly important, and we try to promote its benefits to a variety of businesses from service providers to luxury manufacturers, as Louis Chevrolet Swiss is. The idea behind cryptocurrencies is, essentially, the decentralized and secure payment method that we aim to provide.’

The donations, 10% of sales of each watch, will be given to the European Association Against Leukodystrophies. ELA is a notable organization that fights against the rare genetic disease that destroys myelin, what on its turn protects the central nervous system. ELA representative says: ‘Every week, there are 20 to 40 children born with such disease in Europe only. Fostering research and development, along supporting affected families, is our top priority.’ Since the foundation of the organization in 1992, ELA helped to encourage 447 research projects around the world for this cause.

Louis Chevrolet, based in Porrentruy, Switzerland, is a Swiss watch brand active in the watchmaking industry since 2006. The know-how and the innovativity of the designer enables the company to offer high-end quality Swiss Made watches at a very attractive price. Launched in 2016, the new lines of the brand (LC-01 & Chrono-Tour) are a complete renewal of the philosophy of the brand. The distribution strategy is only via its online-shop, which allows the customer to have the fairest price.

CoinGate, based in Vilnius, Lithuania, is a cryptocurrency payments company established in 2014. The company offers a range of blockchain-focused services for businesses and individuals, including automated payment processing and brokerage services. CoinGate has a user base 50,000 and boasts monthly volumes exceeding over €10 million with over 1,500 merchants using the company’s payment gateway.

ELA was founded in 1992 and became tax-exempt in 1996. The European Association against Leukodystrophies unites affected families in their fight against a rare genetic disease that destroys the myelin, the white substance protecting the nerves of the central nervous system.Every week, 20 to 40 children with a Leukodystrophy are born in Europe.

Since the foundation, ELA has been able to support 447 research projects around the world with a total sum of 42.5 million Swiss Francs. Fostering research and development of therapies is our top priority. Besides that, we also financially support affected families in their difficult everyday life.