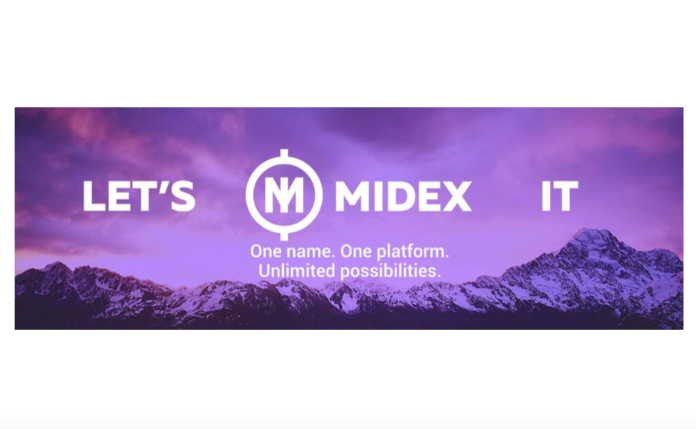 Bitcoin Press Release: Blockchain-based exchange platform Midex is in the midst of its token sale, which has just decrease the number tokens available for participants by 65%. The token sale ends on April 15th, 2018.

23 March, 2018, Hong Kong – Fully licensed Hong Kong-based blockchain exchange startup Midex platform is passing the first stage of its token-sale now. Cryptocurrency enthusiasts are now eligible to purchase the platforms native MDX tokens through the sale to show their support for the development of the project. The Midex token is an ERC-20, offering high speed transactions and superior transparence through ethereum blockchain technology and smart contracts. The token sale is now  live and ends on April 15, 2018, giving users only a few more weeks to get involved with the early stages of the project.

For the purpose of the token sale participants, the MDX costs has been broken down into the following tiers:

The Midex token sale is designed to  support the liquidity of the Exchange and to continue the Financial Platform development. The Midex Exchange as a part of the Midex Platform, is licensed and it is now running in alpha.

The MDX token allows users to get not only passive income but also various bonuses. There is the Midex fund which consists of 20% of daily commissions from operations on exchange and other services. Then this fund is distributed among token holders. So, token holders obtain certain percent from daily transactions in proportion to their investments. Moreover, users can get special internal Midex functionality with MDX tokens. For instance, to increase cash withdrawal or transaction limit. The main detail is that users may get a privilege to exchange their tokens into the shares in the future. Now then, more than 7,1 mln MDX tokens are sold.

“We Increased the number of the team tokens because we want to be sure about token’s liquidity after tokensale and being more motivated to keep all tokens. In parallel, we decreased the amount of contributors tokens but it won’t touch anybody’s interest”,

In order to become a token-sale participant, individuals just have to register an account on the official website and select the option ‘ETH-wallet’, to get accredited with MDX tokens. MDX tokens can then be traded on the Midex web site with up to 50 different cryptocurrencies.

Midex has chosen to  simplify the procedure of buying tokens by offering an option to purchase the MDX tokens with fiat currency soon, in addition to cryptocurrency.

Midex has chosen to make amendments in the structure of fundraising particularly in the distribution of investments. The number of available tokens that are available for contributors has been decreased from 85% to 65%. For bounties there was an increase from 5% to 8%, for advisers an increase from 5% to 7% and for the Midex team and increase from 5% to 20%. So, such adjustments will contribute to the best development of the company, as well as it will remote the expansion of the coverage of people who use Midex services in the cryptocurrency world.

Midex’s instruments and services provide unique solutions on the basis of blockchain, which has no extant analogues in the world and offers revolutionary solutions regarding the consolidation of the world of cryptocurrencies and classical finance systems. The combination of neural networks and smart-contracts controls the majority of processes within the Midex ecosystem, thus eliminating the possibility of mistakes and compromises.

Midex is the source of this content. Virtual currency is not legal tender, is not backed by the government, and accounts and value balances are not subject to consumer protections. This press release is for informational purposes only. The information does not constitute investment advice or an offer to invest