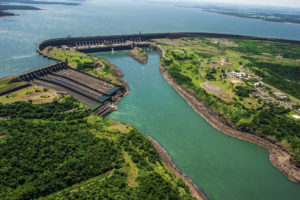 The Blockchain Technology Foundation’s Commons Foundation announced on November 6 that it had signed a contract to build the world’s largest cryptocurrency mining center and the international cryptocurrency exchange, with government support in Ciudad del Este.

The contract is designed to set up the five mining centers (covering an area of approximately 50,000 square meters) near the world’s largest clean-energy power plant, the Itaipu hydroelectric power station, and a 15-year one while ensuring high-speed Internet networks and enacting laws for all necessary business for this project.

“Only 10 to 20 percent of the power generated by the Itaipu hydropower plant is consumed in Paraguay. More than 80 percent of the energy is exported abroad. We will be the world’s largest mining center in Paraguay, using low-cost and abundant clean energy, “said Choi Yong-Kwan, chairman of the Commons Foundation.”

The Commons Foundation plans to pre-sell and offer to go public with the support of Paraguay’s investments and to conclude a business agreement for the establishment of the Cryptocurrency Mining Center and the Cryptocurrency Exchange in Paraguay.

It plans to participate in the project through various methods, eg. For example, through the presale of MicroBitcoin (MBC), BTC (Bitcoin) and Ethereum (ETH).

The project marks the first milestone of building a blockchain ecosystem in South America.

The post Commons Foundation: 5 Mining Centers next to Hydropower in Paraguay appeared first on MinerNews.