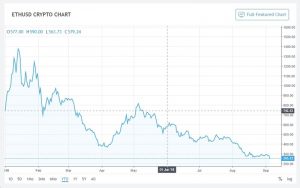 The price of Ethereum (ETH) may never boom again according to Jeremy Rubin. Writing for TechCrunch, the technical advisor and contributor to Stellar and Bitcoin Core gave a harsh assessment of the coin’s future. In his opinion, the coin’s lack of scalability and failure to adopt the latest security practices are a constant problem. However, the real reason Ethereum price charts will suffer surrounds the actual utility of ETH.

Ethereum’s Gas Running Out of Fuel

As a network, Rubin has no problem with Ethereum, the way it works or its value statement. However, in his opinion, the blockchain expert feels like ETH isn’t an integral part of the system. Although all dAPPS on the network have to pay $ETH fees (known as Gas) and the fees are paid for in ETH, it seems as though it’s a self-powered system. This doesn’t always have to be the case, according to Rubin. By following the ERC-20 token template and carrying out something known as economic abstraction, he says that ETH can be taken out of the equation.

While the theory delves into the nuances of economic abstraction and how its possible, Rubin’s main argument is that the Ethereum model makes third-party apps dependent on ETH. This is undesirable and avoidable, which is the reason he believes the price of ETH will continue to fall.

“If all the applications and their transactions can run without ETH, there’s no reason for ETH to be valuable, unless the miners enforce some sort of racket to require users to pay in ETH,” wrote Rubin.

Already this year, we’ve seen Ethereum price graphs take a tumble. Looking at the year to date, a spike in March has since given way to a bearish trend. Indeed, looking at the Ethereum price live on September 5, its $260 valuation is a 10% drop on the previous 24 hours. Network congestion in August not only saw Gas fees sky rocket but the Ethereum price in dollars fall. On top of its internal troubles, Cardano is vying to position itself as an improved version of Ethereum’s smart contracts system.

On the flip side, those who invest in the project and its concept are still optimistic that the price of ETH will increase in the coming weeks, months and years. Recent innovations such as the Minds social network embracing Ethereum and the backing of former Apple engineer Steve Wozniak are clearly positives. However, even if the dAPPS ecosystem continues to thrive, Rubin maintains that it doesn’t ensure the success of ETH. While that may be one man’s opinion, the points raised should certainly be taking into account by those invested in Ethereum price movements both now and in the future.